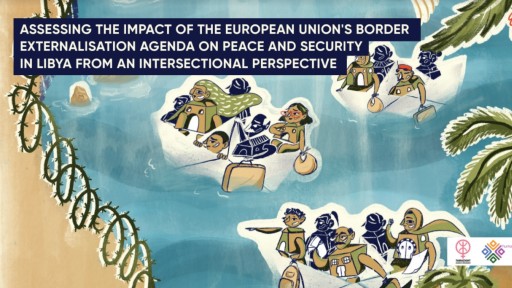 Tamazight Women's Movement and Human Security Collective are pleased share our new report "Assessing the impact of the European Union's Border Externalisation Agenda on Peace and Security in Libya from an Intersectional Perspective", funded by the Knowledge Platform on Security and Rule of Law's Knowledge Management Fund.

Find the report in English here and in Arabic here.

View the accompanying video in English here and in Arabic here

Several projects funded by EU countries are carried out to strengthen and support the Libyan security sector under the banner of Security and Rule of Law (SRoL), including EU border protection. As a result of the tensions arising from this type of support, the questions that bear answering are: to whom is the security sector/state accountable and what power has the EU to call for Security and Rule of Law? And more so, how does this shape the power of women, indigenous peoples, migrants and refugees? Researchers have started to explore some of the effects of these dynamics. But these few research reports have failed to take into account the realities and needs of women, indigenous peoples, migrants, refugees and other marginalised groups and how local power relations are affected by geopolitical interests. This includes understanding the ways in which the existing legal framework is affirming the violations of human rights of marginalised groups.

In order to better narrow down our attention, we focused on SRL policies related to migration, and the EU’s border externalisation process. SRL policies in relation to migration are connected to both the security and development agendas and funding of external donors. They impact both fields intricately. By providing funds, training, equipment, etc. to some groups, it is certain that there will be downstream effects on the power balance locally. We explore waht exactly those are, and where there are lessons for practitioners on how to ensure that efforts to strengthen SRoL do not inadvertently end up undermining human security more broadly, or further endanger and marginalise the rights and power of affected social groups.

The report starts with giving background information on migration policy in Libya, to give an understanding on how border externalisation was conducted prior to the conflict of 2011 and the subsequent changes due to that. Then it moves to discuss border management, mainly the projects that have been implemented throughout the years and have been reviewed for this report. The implementation of these projects relies heavily on the collaboration of Libyan civil society organisations, therefore, it was imperative to detail the conditions under which civil society operates in the country. The findings were prioritised and guided directly by the interviews towards three main titles exacerbating local conflicts, upholding existing power structures, and dilemmas of the humanitarian/human rights worker.

TWM is a feminist organization aims to research, report and advocate on the intersectional gender issues amongst indigenous groups, particularly Tamazight women in Libya. TWM vision is to establish an academic and social think/do tank on indigenous women of Libya. The core values of TWM are gender equality, social justice and diversity of race, class, ability, age, and ethnicity. These values are stemmed from the current situation of women rights in Libya and MENA regions, TWM values are meant to challenge these inequalities and injustices.

Human Security Collective (HSC) is a foundation based in The Hague working on issues of development, security and the involvement of citizens in their communities and societies. We believe that the idea of Human Security with its focus on people, relationships and human rights provides an organizing frame for action. Based on the elements of trust-creation, local ownership, empowerment and collective action, we facilitate conversation between civil society, policy shapers and other actors to promote alternative approaches to current security practice.