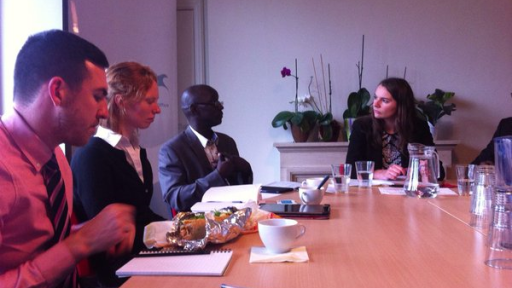 During the week of 16th to 20th November,  two representatives of the West-African network for Peacebuilding (WANEP) in Mali , Naffet Keita (board member) and Mahamady Togola  (national coordinator), came to The Hague and Brussels to share  insights from Malian civil society on Human Security. These insights stem from the project Civil Society for a Human Security Strategy implemented by a consortium including WANEP,  GPPAC and Human Security Collective, and funded by the Austrian Development Agency.

Their visit coincided with the horrific attacks perpetrated both in Paris and Bamako. The impact of these attacks was in our minds and visible in the streets of Brussels during our visit there. It also led to discussions on Countering Violent Extremism,  a topic which we address in our project from a Human Security perspective. Diverse push and pull factors play a role in the attraction of people to violent extremism in Mali. Many of these factors relate to deep-rooted societal and transnational problems which should not be disregarded.  Attention is needed to address the urgent security threats in order to prevent attacks such as the one in Bamako in the short term. However, it is also important to work on structural problems underlying the multidimensional insecurities that people live with in the different regions of  Mali. Together with diverse civil society stakeholders, WANEP, GPPAC and Human Security Collective work on just such a Human Security approach in Mali.

Representatives of EU institutions and government as well as civil society and researchers came together to learn more about the insights gleaned from  this project so far during a Brown Bag Lunch, an informal roundtable discussion organized by EPLO on Friday, 20 November.

Mr. Mahamady Togola explained how the project is set up and shared priorities identified during the first round of consultations that WANEP held with diverse civil society representatives in the different regions of Mali. Priorities that emerged out of this first round include economic insecurity, environmental insecurity, personal insecurity and health insecurity. These diverse kinds of insecurities cover problems expressed by local people in terms of unemployment, conflict over natural resources, environmental degradation,  the presence of explosive devices and armed crime. Health insecurity was related to the Ebola crisis as well as inherent weaknesses in the Malian health service. Currently WANEP is finalizing the second round of consultations. Mr. Togola explained that the process of the two-phase consultation showed up some insecurities that were more persistent, and others that changed over time.

The problem of weak governance was underlined as a structural problem in Mali, an important factor in the different insecurities identified.  Another important factor which Professor Naffet Keita identified is the weakening of mechanisms of social protection in Malian society. Such socio-cultural mechanisms are crucial in engendering  tolerance and solidarity among the people in Mali. Modern society and the state have so far not been able to deliver on this.

The lunch ended with a discussion and Q&A. Amongst others, the role of civil society in implementing the peace agreement that was signed earlier this year was discussed, as well as the strengths and weaknesses of civil society in the different regions in Mali.