Article: Civic Space and the Challenges it Faces 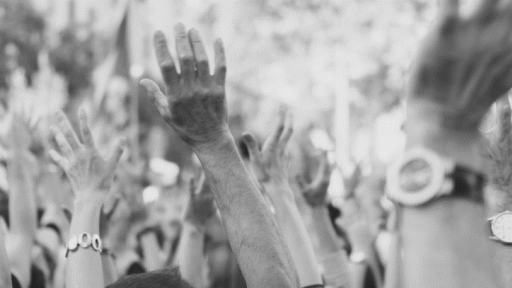 Like the Human Security Collective, we at the Funders’ Initiative for Civil Society (FICS) believe that citizens’ freedom of association, speech and movement should be largely unfettered, so that people know they can speak freely without stigma or fear. However, civic space across the world is under attack – it is shrinking as governments exploit counter-terrorism policies to silence their critics.

In the two decades since the 9/11 attacks, we have seen a wave of restrictive laws, regulations and tactics introduced and abused by governments across the globe in the name of security. Nations are using three interconnected strategies to form the ‘security playbook’ which is restricting civil society at great pace with little scrutiny. Although this abuse of security norms and frameworks is set to be the dominant driver of closing civic space over the next decade, organisations like the Human Security Collective are successfully challenging the impact of this. In this article I set out the tactics used in the security playbook and highlighting the beginning of the movement which is pushing back.

1. Abuse of security frameworks to restrict freedom of association

A broad and inclusive civic space, where organisations, movements and individuals can participate and actively shape their society, is critical to tackling the enormous crises humanity faces in the decade ahead. But UN agencies and transnational bodies have developed norms for governments and private actors to ensure systems – including financial and banking systems, travel routes and social media platforms – are not used to enable “terrorism” and “extremism” and that legislation is introduced to criminalise acts of terrorism and violent extremism – include material support for such acts.

The Financial Action Taskforce (FATF: the global money laundering and terrorist financing watchdog), has huge power over a country’s credit rating and investment prospects, and has used this power to incentivise the introduction of new, stringent oversight of cross-border funding to CSOs. In the last two years alone, there are now FATF endorsed restrictions implemented and heavier regulatory control over CSOs in countries including Uganda, Turkey, Serbia, Myanmar and India. These restrictions have hampered funders’ ability to move resources to partners, and the trend isn’t letting up. A 2019 Amnesty Report revealed 50 laws being implemented or planned, giving governments powers to: control how funds are used; permit intrusion into CSO operations; allow unwarranted audits and raids; freeze bank accounts; and to dissolve CSOs. It is hard to overstate the damage this is doing to the everyday work of social justice movements.

The latest development in this area is the identification of cryptocurrency transfers as potential risk. As there has been an increase in the use of online funding platforms and cryptocurrency, funders have been looking to these as ways to avoid these in-country restrictions and get resources to activists. There are now moves to regulate this form of fundraising and money transfer. The Nigerian government’s move to ban cryptocurrency in the wake of the #EndSARS protests, after supporters of the movement raised funds this way, is just one example.

2. Use of information technologies to surveil and censor actors perceived to be a threat to the state and its interests

The revolution in communications and information technologies, coupled with the expansion of the ‘security industry’, has provided the tools for unprecedented incursions into civic space. Behind many infringements or limitations of civic space, is some form of tech tool, and often a corporation profiting from its use. There is an ever-proliferating number of transnational organisations, forums, ‘stakeholder initiatives’ and even policy events where a wide array of intergovernmental organisations, governments and private companies meet to determine the regimes for new technologies. They meet regularly to discuss regulations for internet access, online speech, the use of biometrics for identification purposes, the deployment of travel watch-lists and bans, cross-border and in-country surveillance, and much more. These agencies, forums and events are unaccountable to actual citizens who end up subject to them. Civil society is rarely invited to these tables, and governments make decisions behind closed doors before CSOs and citizens get a chance to set out how we need the array of new technologies to underwrite our freedoms, not shut them down. You only have to look to states like China to see how governments can execute sophisticated censorship and tracking on a huge scale. But public concern about the impacts of digital technology and Artificial Intelligence on society and democracy are growing and creating opportunities that civil society can capitalise on to defend and expand civic space and we’re seeing now even states like China or Iran cannot withhold the will of their people and the use of technology in a globalised, connected world.

3. Narratives are being used to justify restrictions

Alongside the security-justified hard policies and laws used against government critics, the most common trend we note now is widespread use of ‘threat/fear narratives’ to smear, delegitimise and incite suspicion and even hate against individual activists and CSOs. This usually involves governments and cooperative media implying that those supporting a certain cause are against the nation, against the interests of the majority of the community, are a threat to order and/or prosperity and are to be suspected and feared. The use of narrative attacks is extremely destabilising for those involved in social justice work, and has the secondary effect of making banks, funding platforms and funders averse to working with activists and CSOs. One of the most common tropes includes the labelling of human rights defenders as threats to security. This ranges from explicit labelling of activists as terrorists (recent examples from Egypt, Algeria, Israel, Hong Kong and the UK) to more subtle measures aimed at implying civil society may be a risk to security (for example in Brazil, parliament pushed back against plans to place CSOs under the oversight of the intelligence agencies). Other examples include:

During research we conducted in 2022, we heard that the use of emergency powers in response to the COVID-19 pandemic has broadened societal ideas of what constitutes a threat to security – creating a fertile ground for broad and incorrect use of such terms. These concerted attacks on civic space have not gone unchallenged. CSOs and funder allies, like FICS, have learnt a lot over the last decade about how to navigate, adapt and comply to restrictions. And there are examples of wins and pushing back this counter-terrorism agenda which harms basic freedoms. Concerted advocacy by the Global NPO Coalition on FATF (of which the Human Security Collective is a co-founder) has led to the FATF recognising the unintended impacts on civil society, and ongoing efforts are being made to change their recommendations which impact on CSOs. In Nigeria, Spaces for Change built a strong dialogue with government and relevant stakeholders, while also building a powerful and diverse civil society coalition to press for and win amendments to the law. Last summer civil society groups secured some progress on recognition of human rights impacts during the annual review of the UN Global Counter-Terrorism Strategy. Key UN Special Rapporteurs are documenting human rights and civic space harms and are being heard. And while 2021’s Pegasus hacking revelations contain truly frightening detail of the scale of surveillance of every kind of state critic, they are also a formidable example of the power of public interest journalism in fighting back, networked and determined to fight for online and offline civic space.

But a question for all of us is what more we need to do to tackle the drivers of closing civic space and not just its manifestations, if we are not to end up only constantly trying to clean our porch in a sandstorm. This is where we need the broader funding community, across the wide array of social and environmental issues, and civil society leaders from all sectors and geographies, to stand together and declare we will not permit the shrinking of our civic space. It is our engine room for change, and we will organise to stop the drivers of this terrorism-justified at every level, from transnational advocacy, to legal challenges, grassroots resistance and telling different stories about real human security.